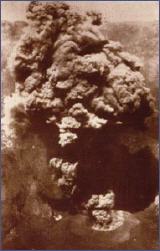 On June 7, 1917; after the celebrations of the institution of the Eucharist, the population surrounding the volcano of San Salvador felt the devastating effect of a large earthquake at approximately 6:55 pm. Crumbling to the ground were the populations of Armenia, San Jualian, Sacacoyo, Tepecoyo, Ateos and other places along the fault line that extends from Caluco to the drainage of Lake Ilopango.

From that mega earthquake, the land continued to tremble in discontinued impulses and intensity; but at 7:30 pm. A larger earthquake brought down houses and buildings, both public and religious, causing panic through out the populated shires around the volcano of San Salvador.

At 8:11 pm, the hill of the Pinar, which is at the border of the northern side of the Boqueron, varies cracks and small craters (Boqueroncitos), from which clouds of black smoke, thick of candent fragments and stink; rose to the sky. It was the prelude, giving way to a river of incandescent magma that flowed passing close to the community Las Granadas, this river caused a blanket of 2 kms in length and about 200 to 250 meters wide, with a thickness of 2 to 3 meters, which is approximately 800,000 cubic meters of lava and waste, according to Don Jorge Larde and Larin. 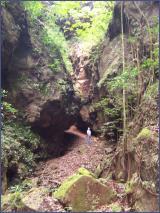 At around 8:45 pm. The intensity of the after shocks increased, giving way to an earthquake that was felt 35º north. This tremor literally threw people and objects, even though the intensity of that of earthquake was less than that at 6:55 pm. This earthquake coincides with the start of a new eruption, coming from the craters of “los chintos” specifically from the lower crater “el tronador”, from which an impetuous amount of candent material flowed to the north covering a length of 6.5 km and a width of 100 mts. And up to 3 or 4 km in some areas.

This blanket buried fertile grass lands and almost virgin hills, along with homes. The panic spread through out the locals, which had no idea what to do. This large blanket of magma sliced the railway line from Quetzaltepec to El Sitio del Niño. The craters earlier mentioned remained active up to the afternoon of the 10 June. 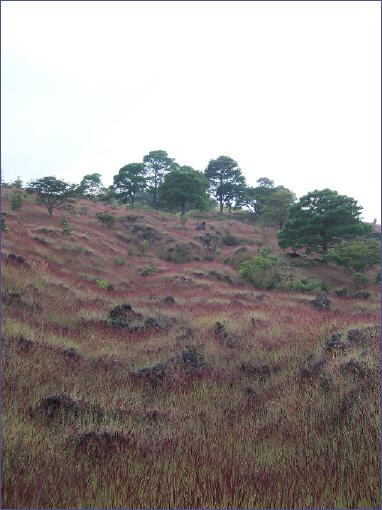 Mean while the hypogene effect was visible at the Boqueron from the 9 of June, from dawn up to the afternoon, the water that had once formed the lake in the crater slowly evaporated, forming a thick cloud of smoke. On the 13 th day don Jorge Larde observed how the water in the crater, seemed hot but not boiling and on the 28 th day the water had completely disappeared. There were explosions that sent up to the sky columns of hot mud up to 200 mts high and on the days 28 and 29 during the night it was possible to observe how candent material was expelled forming in the interior a small crater that has a height of 35mts. The ashes expelled from the eruption fell over Santa Tecla

In November 1917, the spectacular and life threatening eruption that had began on the 7 of June, came to an end

This day, ninety one years after this catastrophe, we can feel proud to observe spectacular panoramic views, which have impregnated all of those that value.

The phenomena of the Boqueron is one of our natural legacies from which we can learn many things, specially now that the new national park El Boqueron will be opened by the Ministry of tourism this month and corresponds to the strategic plan 2014.